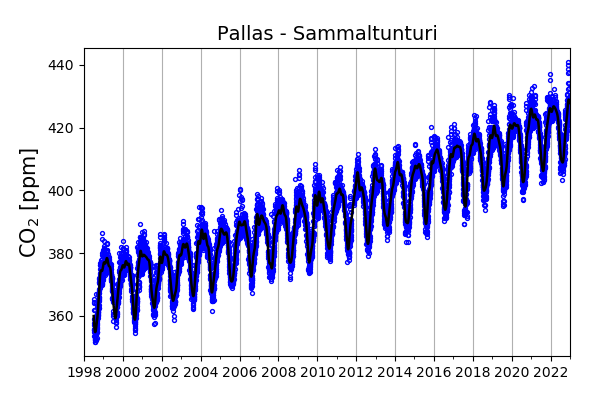 CO₂ concentration has been measured at Pallas GAW and ICOS station since 1997.

Accurate ambient air concentration measurements are the basis in following trends and in estimation of regional sources and sinks. These are done by atmospheric transport and biogeochemical models which use also remote sensing data. The research is based on internationally well-calibrated atmospheric concentration and ecosystem net gas flux measurements carried out in multiple locations both in Finland and abroad. The main research station is Pallas-Sodankylä observatory which is one of the main WMO Global Atmosphere Watch sites on high latitudes.

Micrometeorological flux measurements are conducted to observe carbon dioxide (CO₂) sinks and sources of forests, wetlands and fields and methane (CH₄) emissions from wetlands and landfills.

Concentration and flux measurement stations of the Greenhouse Gases group

Finnish Meteorological Institute operates Pallas-Sodankylä GAW-station. In Pallas node, the main greenhouse gases are measured continuously and weekly air samples are sent to NOAA in Boulder, USA for analyses as part of the Cooperative air sampling network of the NOAA/ESRL and to ICOS Central Analytical Laboratory. The regional ICOS network for accurate carbon dioxide and methane observations in Finland have measurements at Pallas, Utö island on the Baltic Sea, Puijo-tower in Kuopio (University of Eastern Finland) and Hyytiälä (University of Helsinki). In addition, FMI conducts monitoring at Sodankylä node of the GAW station and at FMI premises at Kumpula, Helsinki.

Service of Eddy-covariance tower at a wetland in Pallas. Photo: Timo Lindholm

The greenhouse gas exchange between atmosphere and biosphere varies markedly depending on the ecosystem and prevailing environmental conditions. CO₂ is fixed to the ecosystem by the plant photosynthesis. On the other hand, CO₂ is released to atmosphere by plant respiration and soil microbes. During the Holocene, the forests and wetlands of boreal zone have accumulated great carbon reservoirs in the peat and mineral soils. CH₄ is formed when organic matter decomposes in anoxic condition. The natural CH₄ formation is greatest in humid ecosystems (wetlands, lakes). Human activities release significant CH₄ emissions from landfills and ruminants. N₂O emissions are rather small from natural ecosystems but the agricultural soils are an important source for N₂O due to the use of nitrogen fertilizers.

The GHG exchange between the atmosphere and ecosystems in about 10 ha scale can be measured by the eddy covariance method by observing gas concentrations and vertical wind speed by fast response instruments. From these observations it is possible to calculate the short term balance (30 min) and further the annual balance of different GHG.

The group participates in Global and European flux measurement networks.