The annual changes in temperature are of crucial importance for Finland's climate. It is natural to distinguish seasons using a thermal criterion, with seasons defined by the daily mean temperatures of 0°C and 10°C. With this criterion the lengths of seasons can vary greatly from year to year.

In winter, the mean temperature remains below 0°C, but warm airflows can raise the daily high above 0°C at times. Winter usually begins in mid-October in Lapland and during November in the rest of Finland, though not until December in the southwestern archipelago. It thus takes about two months for winter to proceed from Lapland to Åland. The sea and large lakes slow down the progress of winter. Winter is the longest season in Finland, lasting for about 100 days in southwestern Finland and 200 days in Lapland.

North of the Arctic Circle, part of winter is the period known as the "polar night", when the sun does not rise above the horizon at all. In the northernmost corner of Finland, the polar night lasts for 51 days. In southern Finland, the shortest day is about 6 hours long.

Permanent snow covers open grounds about two weeks after winter begins. The snow cover is deepest around mid-March, with an average of 60 to 90 cm of snow in eastern and northern Finland and 20 to 30 cm in southwestern Finland. The lakes freeze over in late November and early December. The ice is thickest in early April, at about 50 to 65 cm. In severe winters, the Baltic Sea may ice over almost completely, but in mild winters it remains open except for the far ends of the Gulf of Bothnia and the Gulf of Finland.

The coldest day of winter is usually well after the winter solstice, at the end of January everywhere except the maritime islands and coastal regions, where the slower cooling of the sea delays the coldest period until the beginning of February. The coldest temperatures in winter are from -45°C to -50°C in Lapland and eastern Finland; from -35°C to -45°C elsewhere; and -25°C to -35°C over islands and coastal regions. The lowest temperature recorded in Helsinki is -34.3°C (1987). The lowest temperature recorded at any weather station in Finland as of 2010 is -51.5°C (1999).

In spring, the mean daily temperature rises from 0°C to 10°C. Spring begins in early April in Åland and the southwestern archipelago and later in April elsewhere, except for northernmost Lapland, where it does not begin until early May. Thus, spring begins a month earlier in the south than in the north. Its duration ranges from 45 to 65 days, being longest in the maritime islands and coastal regions, because of the coolness of the sea. Once the mean daily temperature exceeds 5°C, the thermal growing season is considered to have begun. This takes place about one month after the beginning of spring: at the end of April in southern Finland and at the end of May in northernmost Lapland.

For the real growing season to begin the snow must melt; this depends on the amount of snow, elevation and the position of the region relative to the sea. Open areas lose their snow cover within two to three weeks of the beginning of spring, whereas on average the snow in the forest smelts about two weeks later. The lakes usually become ice-free soon after the growing season begins in April in southwestern Finland, in May in the interior and in June in Lapland.

In summer the mean daily temperature is consistently above 10°C. Summer usually begins in late May in southern Finland and lasts until mid-September. Summer in Lapland starts about one month later and ends a month earlier than the south coast.

The regions north of the Arctic Circle are characterized by "polar days", when the sun does not set at all. The northernmost parts of Finland have 73 such days every year. Even in southern Finland, the longest day (around Midsummer) is nearly 19 hours long. The warmest day of the year comes about one month Midsummer, i.e. around July 20, in the whole of Finland.

The highest summer temperatures in the Finnish interior are from 32°C to 35°C. Near the sea and over the maritime islands, temperatures over 30°C are extremely rare; the highest temperature ever recorded in Helsinki is 31.6°C. The highest temperature ever recorded was on July 29th, 2010, when 35°C was exceeded in several places (the maximum being 37.2°C in Joensuu). Heat waves, with a maximum daily temperature exceeding 25°C, occur on an average of 10 to 15 days per summer inland in southern and central Finland, and 5 to 10 days in northern Finland and on the coast. In the course of the summer, thunderstorms occur on 8 to 14 days in the interior and 4 to 8 days in coastal areas and northern Lapland.

Thus the average length of the growing season is 180 days in the southwestern archipelago, 140 to 175 days elsewhere in southern and central Finland and 100 to 140 days in Lapland. The first snow falls in northern Finland in September and elsewhere in October.

How much snow is there on average in Lapland during Christmas? How warm is the Midsummer's Eve usually in Helsinki?

If you need more information about Finnish climate or weather, send us an email at:

If you wish to order climate data, please read through the instructions related to data requests.

Observations are subject to final quality control by the FMI after publication. 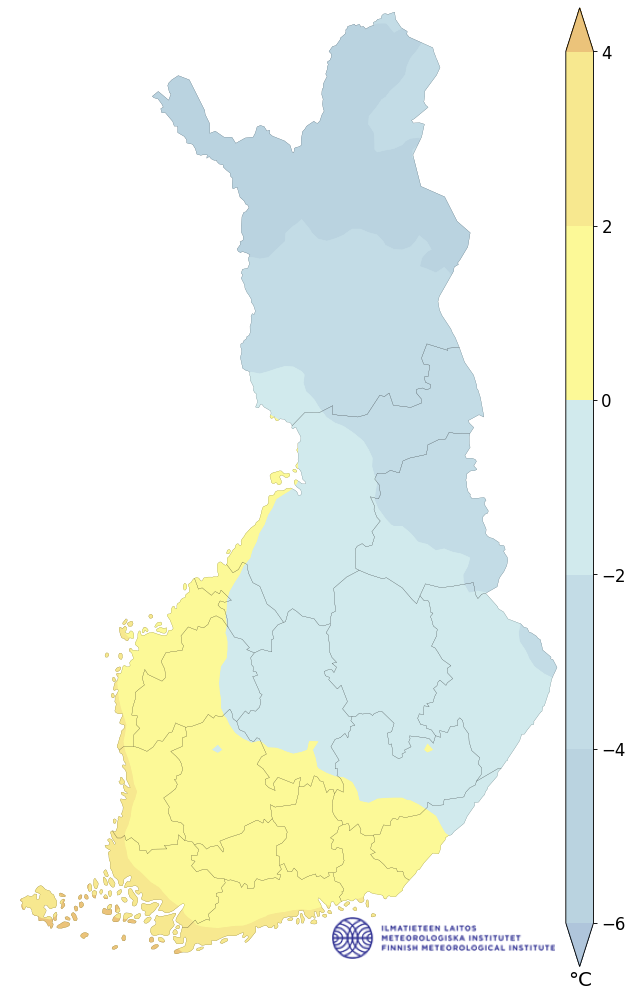 Daily median of the maximum and minimum temperatures and snow depth 1991-2020. You can select the map of other dates from the date selector.