International, top-level atmospheric research being carried out on Pallastunturi Fell

Its northern location, interdisciplinary cooperation and long history of measurements are the key assets of this weather station focused on atmospheric and ecosystem research. 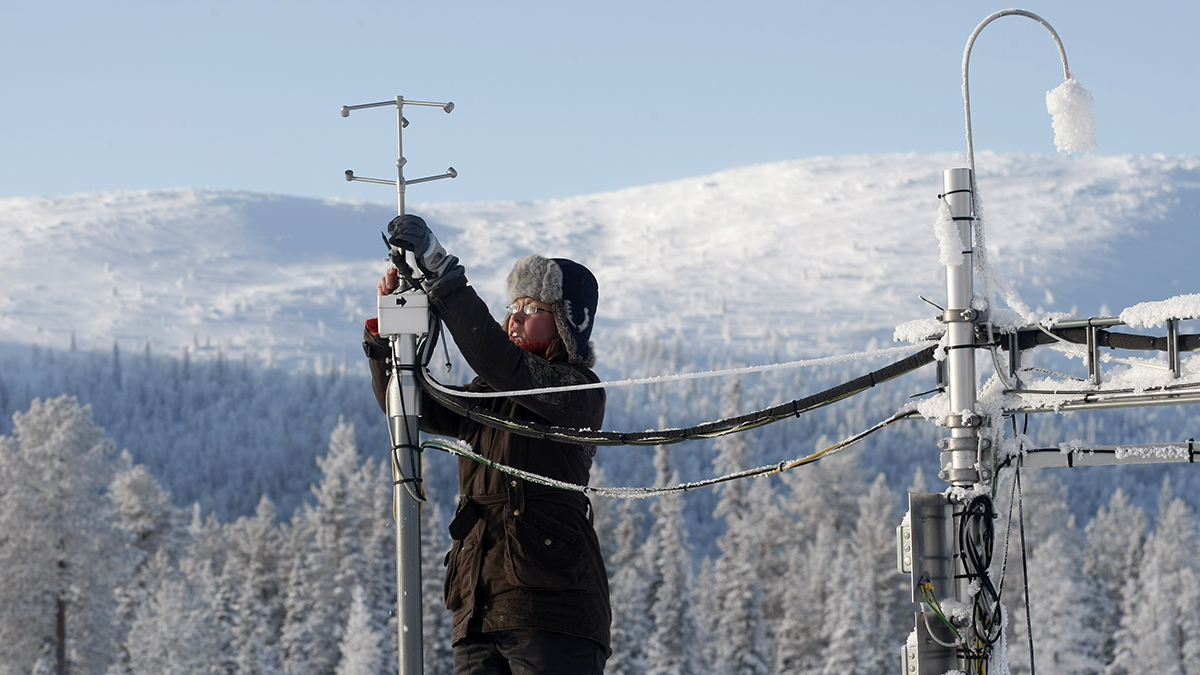 The Pallas Research Station is located in the Pallas-Yllästunturi National Park in Lapland, around 170 kilometres north of the Arctic Circle. The measurements obtained in this fell region can, among other things, shed light on what progress is being made towards objectives for reducing greenhouse gas emissions and mitigating climate change. Pallas is one of the most important climate and ecosystem research stations in northern Europe. The data obtained by the station is unique in terms of the number variables being measured and the station’s location.

“There are few such measurement stations in the Arctic region. Taking measurements here is particularly important, as the northern region is known to be warming up four times faster than the rest of the world,” explains Antti Hyvärinen, Head of the Atmospheric Composition Research Unit.

The Finnish Meteorological Institute (FMI) has a long history of measuring air quality and making weather observations in the Pallas area. The first weather station was erected near Lake Pallasjärvi in 1935, and more have been added since. The station’s operations expanded in 1991 when atmospheric measurements were initiated on Sammaltunturi Fell. Since then, the research station has developed further and is currently part of distinguished research networks such as ICOS, GAW and ACTRIS.

The core of the Pallas Research Station is the measurement station at the top of Sammaltunturi Fell, which is used to study the atmosphere and climate change. According to those who first set up the station, the site was originally home to a wooden hut and a Finnish Broadcasting Company mast. FMI decided to stay there after the broadcasting company left. Metsähallitus was also a natural partner in the area.

In 1991, a new station dedicated to atmospheric measurements was built in cooperation with Metsähallitus, and five years later, measurements of greenhouse gases also began. “In hindsight, it is a good thing that this step was taken, because it has provided us with what is now Finland’s longest series of accurate air concentration measurements,” Associate Professor Annalea Lohila says with satisfaction.

Climate research requires long-term persistence, as long time series are valuable for obtaining good results. “If, for example, we measure carbon sinks in forests or swamps over a period of five years, this may not be enough to say anything about any overall trends,” explains Lohila. The variation in measurement results from one year to the next may be large, depending on whether the summer is dry or wet.

Long time series are research capital that cannot be taken away. “Now that data has been collected at Pallas for the past two decades, we can start to assess more extensively what is going on in the long term and why. The value of the data increases year-on-year as more and more is collected,” Lohila adds.

An FMI measurement station has been built on top of Sammaltunturi Fell. Image: Pia Anttila

Research in the swamp, lake, forest and open air

Measurements are also made in terrains other than the fell peak. Measurements of carbon dioxide exchange started to be made on Pallas in the 2000s, when a flux measurement tower was built above the Kenttärova Norway spruce forest. The research was soon extended to cover a swamp, followed later by the lake into which the waters of the catchment area flow.

In the swamp, the methane emissions from these waters are examined. In fact, the Pallas station has one of the longest time series of methane measurements in the world. The collected data is valuable in itself, but the measurement results are also used to create models for predicting the future effects of climate change.

The area is examined as a single entity: “Pallas is one of the few research locations where researchers have obtained a comprehensive understanding of the different environments within a small area. Here, it is possible to simultaneously study what is happening with a particular gas in a lake, forest and swamp,” explains Annalea Lohila, whose work focuses on the study of greenhouse gases and the carbon cycle.

“Pallas is one of the few research locations where researchers have obtained a comprehensive understanding of the different environments within a small area."

Environmental research in the region is carried out in close cooperation with the Natural Resources Institute Finland (Luke), the Finnish Environment Institute (SYKE) the Geological Survey of Finland (GTA), and the University of Oulu. Foreign partners are also involved in several projects.

“Partnerships are very important. Working together and combining multiple perspectives and competencies multiplies the value of the data,” Lohila points out, emphasising the importance of multidisciplinary cooperation.

An ordinary day at the research station is often quite quiet, with the only sound being the whirring machines. The measurements made by FMI are mostly automated. Regular weekly routines, such as sampling, are handled by a Metsähallitus employee hired for the task. They also come to help if one of the instruments conks out. There are plenty of measuring devices, as Pallas is one of the most fully-equipped stations in the Arctic for a number of tasks, including atmospheric measurements.

The machines don’t do everything, however. In summer, you can find research trainees engaged in tasks such as counting numbers of cranberry leaves by hand and examining their development in the area.

In addition to long-term measurements, the station has various shorter-term projects, which may involve, for example, studying a particular topic over a four-year period. In summer 2022, researchers will tour the fell lakes and streams of the Pallas area by rubber boat, measuring waterway emissions. From summer 2022 onwards, work will also begin at Pallas to study the effects of swamp restoration on the climate and waterways.

A window into climate change impacts

Pallas provides a window into the impacts of climate change in the north. Through the measurements taken and research done, it is possible to see how climate change is impacting different seasons in different ways. “The level of warming may not be the same for every season. We have already seen how the winters have warmed considerably, but the summers hardly at all,” says Lohila.

The autumn has also been of particular interest: “When the autumn warms up, it does not necessarily increase carbon sequestration. Indeed, it may even decrease it because the soil remains unfrozen and the bacteria that feed on peat and humus run wild,” explains Lohila.

Carbon sinks and sources at the national and even continental level are also determined by inverse mathematics, which is a special area of competence at FMI. Atmospheric inverse calculations can be used to deduce from measured concentrations and their variation where the emissions are coming from.

Measurements are also made in Lompolojänkä Swamp. Image: Simon Schallhart

At the global scale, Pallas is located relatively close to the Arctic Ocean. For measuring atmospheric composition, data can also be obtained from Siberia and the Arctic Ocean, although there are only a few research stations in these areas. Of particular interest is what is happening in the Arctic Ocean as the quantity of sea ice decreases.

The impacts can be seen also in Finland. In 2017, Pallas experienced an exceptional blizzard. Four years later, a research team at the University of Oulu investigated the cause of the storm by utilising the data from Sammaltunturi Fell: climate change had warmed the Arctic Ocean so much that the unfrozen, open sea area eventually produced rain.

Alongside the study of greenhouse gases, fine-particle research on aerosols and clouds is also carried at the top of Sammaltunturi fell. The research station on top of the fell is the pride of the ACTRIS research network, whose work is focused on aerosols, trace gases and clouds. Aerosols are indeed one of the main sources of uncertainty in climate change calculations.

“We do not precisely know how fine particles will affect the climate,” explains aerosols researcher Antti Hyvärinen. One reason for this is the complex interaction between aerosols and clouds.

Sammaltunturi Fell is also particularly suitable for studying clouds, as low-level clouds are constantly sweeping over the fell. During autumn and winter, the peak is in the clouds 25-40% of the time. Cloud research is full of the new and unknown, as little is yet known about Arctic clouds.

Sammaltunturi Fell has one of the longest time series in Europe for measurements of cloud properties. Such data is needed for climate research. “There is still a great deal of uncertainty in climate calculations that results from our incomplete knowledge of how clouds are created and how long they last. This is important in climate research, as clouds affect the radiation properties of the atmosphere,” Hyvärinen explains.

Pallas is officially home to the cleanest air in the world.

Particles also affect air quality. According to the measurements, Pallas is officially home to the cleanest air in the world. Its air is actually sent in sample bottles to different laboratories around the world for use in comparative studies.

The Pallas station is seeking to develop and maintain its measurement work in the future, as long-term data collection is the only way to detect changes when carrying out atmospheric and ecosystem research. Antti Hyvärinen says that doing research at Pallas never ceases to fascinate him: “Here, we are making new discoveries all the time. You never know what might be just around the corner.”

Take a tour of the Pallas Research Station by watching the video below: