As our climate warms, peatlands will have greater loss of water than forests 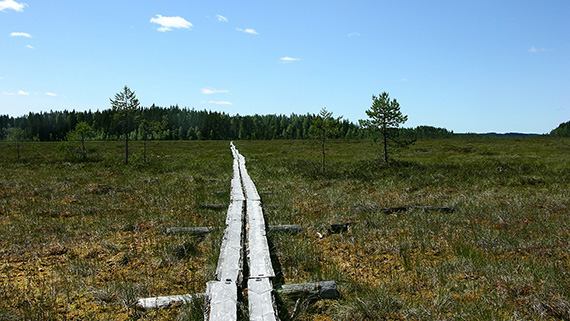 "Increased evapotranspiration associated with climate warming has a significant impact on water and carbon dynamics in the northern boreal zone," Associate Professor Annalea Lohila from the Finnish Meteorological Institute says.

Peatlands constitute a massive carbon storage. As these peatlands dry up, carbon stored in them can be released into the atmosphere, which would contribute to climate warming. In addition, the risk of forest fires would increase. The differences in evapotranspiration from peatlands and from forests are expected to grow as our climate becomes warmer.

"Peatlands have adjusted to wet conditions, but then again, moss growing on peatlands cannot regulate evapotranspiration like trees do, by regulating their stomata," Professor Eeva-Stiina Tuittila from the University of Eastern Finland points out.

"Increased evapotranspiration can lead to water level drawdown and this, in turn, can initiate a change in vegetation and in the entire peatland ecosystem's ability to store carbon."

In forests, on the other hand, trees can close their stomata to reduce evapotranspiration. This regulation concurrently reduces photosynthesis and, consequently, the ability of forests to bind and store carbon.

Researchers from the Finnish Meteorological Institute, the University of Eastern Finland, the University of Helsinki and the Natural Resources Institute Finland participated in the international study using observations from 95 eddy covariance tower sites in Canada, the US, Germany, Russia and the Nordic Countries. Finland was represented in the study by 11 measurement tower sites, some of which belong to the European Integrated Carbon Observation System, ICOS.

Current climate system models are not accurate enough in describing evapotranspiration from peatlands, and this is why evapotranspiration remains underestimated. The new study shows that the reliability of climate estimates can be improved, and changes in ecosystems' carbon storage can be assessed increasingly accurately.

"The climate system models that we currently use to predict carbon and water dynamics don't accurately describe evapotranspiration from peatlands, because they don't take soil moisture into consideration appropriately," Annalea Lohila says.

This is why the models underestimate the amount of water lost by vegetation and overestimate the availability of water now and in the future, especially in areas that are rich in peatlands, such as Finland. Making climate models more accurate in this respect would result in increasingly accurate estimates of the consequences of climate change, and of the risk of forest fires.

The measurements used in the study have been conducted in several projects funded by the Academy of Finland and the EU.