Aapeli storm marked the beginning of a cold January

The first half of January was mild and the latter half fairly cold. The average temperature for the month was 1 to 3 degrees colder than usual. The amount of snow was exceptionally high in the south, whilst Lapland had less snow than normal. 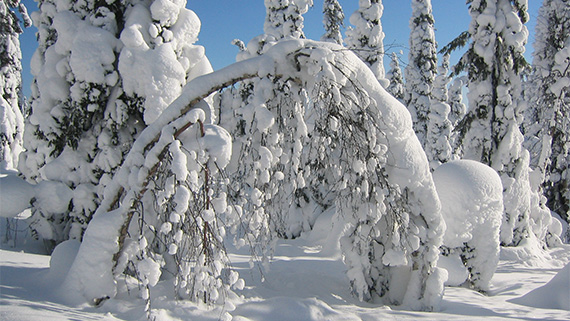 According to statistics from the Finnish Meteorological Institute, January was 1 to 3 degrees colder than usual in most parts of the country. However, it is not rare for January to be this cold. This occurs approximately every three or four years. The previous colder January was in 2016. Compared to the usual temperatures, Southern Lapland was the coldest and Åland the mildest, where the month's average temperature was normal.

January was rainier than usual in the south, whilst in the north the weather was drier than usual. The month's highest precipitation level of 86.7mm was recorded in Sjundby, Siuntio.

At the end of the month, the level of snow was roughly half a meter throughout the country, a bit less on the western coast. Considering the time of the year, the level was exceptionally high in some southern areas. Such levels occur roughly once in 10 years. On the other hand, there was less snow than average in the north.

The most significant weather event occurred right at the start of the year. On the 2nd of January, the Aapeli storm broke the record for highest average wind speed in Finnish sea areas. The new record is 32.5 metres per second. The waves at sea were high and storm-force gusts were measured even inland. It snowed 20cm inland and crown snow-load caused damages.