Year 2018 will be remembered for its particularly warm and dry summer. 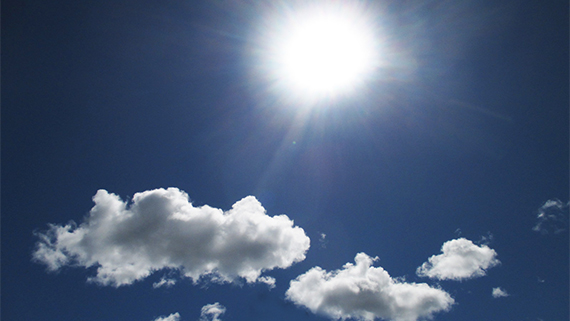 According to the figures of the Finnish Meteorological Institute, the year 2018 was 1 to 2 degrees warmer than usual. On the basis of statistics covering over 100 years, such a warm year occurs on average once every 10 to 15 years. However, with climate change, equally warm or warmer years have occurred frequently in recent years: 2011, 2013, 2014 and 2015.

"Finland's average temperature has been assessed since the middle of the 19th century, for more than 150 years. Half of the warmest ten summers are from the current decade", explains Meteorologist Pauli Jokinen.

Particularly in the area from the western part of the country to Sea Lapland, the annual rainfall was exceptionally low, occurring less frequently than once in 30 years. Various observation stations measured record low rainfall as a result of the dry summer. For example, in Merikarvia's Tuorila it only rained 425.5 mm, while the typical precipitation is 683 mm. In Merikarvia, 2018 was the driest year in the 50 years of measurement history. In many drier areas, rainfall remained at approximately 400 mm, which is only two thirds of the ordinary. Northern Lapland and eastern parts of the country measured precipitation levels closest to the typical rainfall.

December was milder and drier than normal

The average temperature for the month of December was 1 to 4 degrees higher than usual. The greatest thermal deviation was measured in the north, the smallest in the south. On average, such a mild December is repeated every few years.

Rainfall in December remained lower than usual in large parts of Finland, and in the central parts of the country, it was approximately half of the long-term average in places. However, Central Lapland had clearly more rain than usual.  The highest level of precipitation, 80.6 mm, was measured in Kemiö, Kemiönsaari, and the lowest, 12.3 mm, in Kilpisjärvi. Low December level of precipitation in the central parts of the country and high rainfall in Central Lapland typically recur every 5 to 10 years.

At the end of the month, the eastern and northern parts of the country had 20 to 30 cm snow, while the western part of the country had mostly 0 to 10 cm. In the whole country, there was less snow than usual in December, and in some parts of Lapland, exceptionally little.