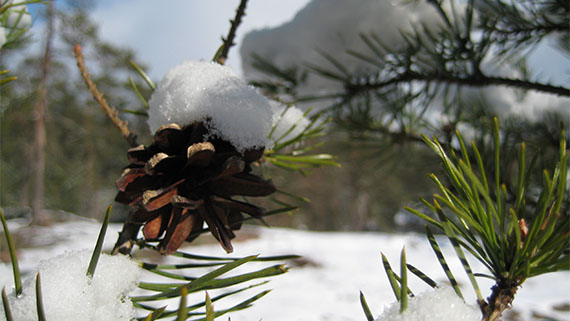 The average temperature in February rose to near zero degrees Celsius in the southwest corner of the country, while in northernmost Lapland it remained below -8 degrees. The deviation from the long-term average was greatest in central and eastern parts of the country, where it was nearly seven degrees, and in some places even more. The smallest deviation, less than five degrees, was in the Åland Islands and in northernmost Lapland. At the beginning of the month there was great variation in temperatures, as had been the case in January, but toward the end of the month, it was evenly mild. The highest temperature for the whole month, +9.6 degrees, was measured in Kaarina on February 10 and the lowest temperature, -31.1ºC was in Salla on February 15. The mild conditions resulted from the large-scale weather situation involving an extensive and unchanging low pressure area, with mild air flowing from the southwest into Europe. Cold air masses, meanwhile, stayed in Siberia and East Asia, as well as in North America.

At the end of the month, the snow cover was less than 10 centimetres in the south-westernmost part of Finland and in the Vaasa area, but in the north of North Karelia, in Kainuu, and in West Lapland, there was more than half a metre. Compared with long term averages, there was less snow than usual, and  in southern and central parts of Finland, the deviation was locally more than 20 centimetres. Only Kainuu, Koillismaa, and parts of Southern Lapland had more snow than usual.

Average temperatures for the winter months, December-February, were higher than usual in all of Finland, and in southern and central areas they were unusually high. At most, the deviation from the long-term average was more than four degrees. The smallest deviation, less than two degrees, was in northernmost Lapland. The last time that a winter was milder than this one was in 2007-2008. All three months were miler than usual.

The lowest temperature, -39,6 °C, was recorded in Utsjoki on 11 January. The last time that the winter temperature did not dip below -40 degrees was in the winter of 2012-2013. Precipitation in the winter months was higher than usual. In western and central areas, it was exceptionally high. Precipitation was heaviest, more than 200 mm., in the southwest, northern parts of Kainuu, and in coastal areas of Lapland.  It was lowest in northernmost Lapland, where precipitation fell below 100 mm. Owing to the mild temperatures, there was generally less snow than usual throughout the winter.