Intensity of catastrophic storms has increased in Europe since 1990

FMI researchers showed that storm-induced forest damage went through a change point in 1990. After 1990 the worst storms have been 3.5 times as catastrophic as before, mainly because of climate change. 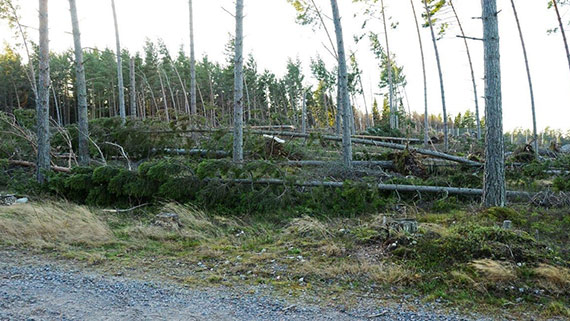 The Finnish Meteorological Institute (FMI) has investigated intense large scale storms based on their impacts on primary forest damage in Europe over the period 1951 - 2010. It was already known that storm-induced primary damage has grown in that period, but it was considered to be mainly due to increase in total growing stock and forest management practices, such as preference for Norway spruce.  However, the FMI researchers found that storm-induced forest damage went through a statistically significant change point in 1990. "After 1990 the worst storms have been 3.5 times as catastrophic as before. This type of change cannot be caused by a change in forest management practices. Instead it is related to a change in storm climate", says Head of Unit Hilppa Gregow from FMI.

The study also addressed the storms' gust wind speeds that have been measured since the 1980's. Hilppa Gregow says that in all of the most catastrophic storms, which include Wiebke (1990), Lothar (1999), Martin (1999), Gudrun (2005), Kyrill (2007), and Klaus (2009), the highest gust speeds were between 50 - 60 m/s. It has been recently shown that the stems of all kinds of trees will break when wind speed exceeds 42 m/s, whereas Norway spruce can be uprooted also at lower wind speeds. "Therefore, the change point in forest damage in 1990 may at least partially be due to the strongest storms having more widespread gusts with wind speeds exceeding 42 m/s", says Hilppa Gregow.

The FMI study also found that the worsening of the catastrophic storms is a wintertime (December-February) phenomenon, whereas the intensity of the strongest autumn storms has decreased since 1990. Hilppa Gregow says that although the North Atlantic oscillation (NAO) correlates with storminess in general, the researches were not able to relate the 1990 change point to changes in NAO. Climate change, on the other hand, could have an impact on the storms. For example, recent studies have found simultaneous changes in the Arctic ocean summertime ice cover, and North Atlantic wind climate.