What does the Arctic region's snow cover look like today? How thick was the ice that covered the Arctic Ocean in January? Will we see the Aurora Borealis in the near future? 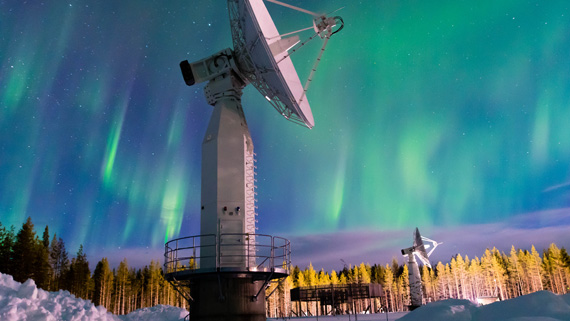 The Finnish Meteorological Institute's Arctic Space Centre will provide answers to all these questions and many others. Sodankylä's Arctic Space Centre has expanded from a satellite data centre to a place where the entire chain is handled from the reception of satellite data, to processing and distribution and then the utilisation of data. The data can be utilised for example by environmental and security authorities.

The Finnish Meteorological Institute's Arctic Space Centre's infrastructure expanded again on 5 April, when a new approximately 15-metre high SOD03  satellite data receiving antenna was  taken into use. The antenna is the third receiving antenna in the area. "However, this antenna is only one part of the centre that has been established in Sodankylä over the years," Head of the FMI's Arctic Research Unit Jouni Pulliainen states.

The Arctic Space Centre is tasked with producing important data from the Arctic regions utilising the newest satellite and space technology. The centre also produces services that are of importance to the Arctic region's security. Data transmitted by satellites can be utilised e.g. in meteorological services, flood prediction systems, ice services and shipping. One of its key applications is the monitoring of the Baltic's ice situation for the needs of winter-time maritime transport. The service is based on the radar satellite materials produced in Sodankylä. "Satellite data will be received real-time from satellites flying over Sodankylä. After this, the data will be processed into the end product, which will be transmitted immediately to the bridge of an icebreaker operating in the Baltic Sea.

Centre is an investment in achieving objectives set for Chairmanship

The Arctic Space Centre will also combine Arctic expertise and space technology in a more diverse way than previously. The long time series obtained from satellite observations can also be used e.g. in climate change research. The data is important especially in Arctic regions, where the effects of climate change are already particularly evident.

"The Arctic Space Centre is a concrete investment that will help Finland achieve the objectives it has set for its Chairmanship of the Arctic Council. As chairman, Finland must also be able to react to the environmental development of the Arctic regions, as climate change will impact on the future of the entire Arctic region," Minister of Transport and Communications Anne Berner stated.

The centre is also well-equipped with a variety of observation instruments that can help in verifying the accuracy of various satellite measurements. "Without these reference measurements, the observation data produced by satellites would be qualitatively unusable," Mr Pulliainen notes.

The Arctic Space Centre's partners and financiers include international space agencies (ESA, EUMETSAT, NASA, NOAA), the European Union and numerous other national organisations and research institutes such as the Finnish Environment Institute (SYKE), and the Sodankylä Geophysical Observatory.

Sodankylä's infrastructure has been developed so that large satellite data masses are accessible via machine-readable interface or as a cloud service. The cloud service and virtual computing platform built in Sodankylä facilitate the development and production of new added value services and products. In principle, a lot of the data are entirely free. "In the long-term, I believe that some entirely new business will be established at some point that will be based on this data," states Jouni Pulliainen from the Finnish Meteorological Institute.

On account of new development work and expansion of activities, Sodankylä is also becoming a test platform for intelligent transport research. A versatile infrastructure is currently under construction in Sodankylä; it will combine the 5G network, intelligent transport services, weather expertise and challenging winter conditions.