Finnish researchers made history: The amount of snow in the Northern Hemisphere can now be reliably estimated

For the first time in the world, researchers from the Finnish Meteorological Institute have reliably estimated the amount of annual snow mass and changes in snow cover in the Northern Hemisphere between 1980 and 2018. According to the study published in the Nature scientific journal, during the research period snow mass has remained the same in Eurasia and decreased in North America, although the extent of snow cover has decreased simultaneously in both continental regions. 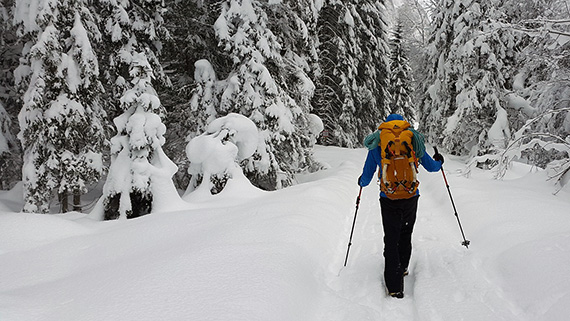 "The method can be used to combine different observations and it provides more accurate information about the amount of snow than ever before. The previous considerable uncertainty of 33% in the amount of snow has decreased to 7.4%," said Jouni Pulliainen, the main contributor to the article and Research Professor at the Finnish Meteorological Institute.

The amount of snow cover and its changes affect the climate system and freshwater reserves. More detailed data will enable a better assessment of the role of seasonal snow in the carbon dioxide and methane cycles and water resources. The data can also be used to improve the quality of weather forecasts and provide more accurate information on flood risks. In addition, a more accurate historical time series can be used to analyse and develop the reliability of climate models.

The snow mass has remained the same, but the extent of snow cover has decreased

The researchers found that there has been little reduction in snow mass over the 40 years in the northern hemisphere when looking at the annual maximum amount of snow at the turn of February-March.

However, the extent of the snow cover has decreased significantly over the same period, especially in late spring. The change in the extent of snow cover is visible both on the entire northern hemisphere and in the Arctic.

"In the past, estimates of global and regional snowfall trends have only been indicative. The results show that the amount of rainfall has increased in the northern regions, especially in the northern parts of Asia," Jouni Pulliainen said.

In northern areas, where rainfall generally turns to snow in winter, the snow mass has remained the same or even increased. In the southern parts, where in winter rainfall comes down as water rather than snow, both the extent of the snow cover and the snow mass have decreased.

This winter there is more snow in the north than average

In North America, the amount of snow has also been higher than average in the northern latitudes. In the early winter, there were numerous large snowstorms that brought a large amount of snow to the area at once.

"The snow line across the globe has been more northern than normal this winter, while in the northern latitudes there is much more snow in many places than in the average years," said Kari Luojus, Head of Group at the Finnish Meteorological Institute and co-author of the Nature article.

Snow mass in the Northern Hemisphere in gigatonnes. The amount of snow this winter is shown in red, the most recent observation is from 13 May 2020. The average snow mass from 1982 to 2012 is shown in the chart with a black dashed line. Data from satellite observations and ground measurements. Finnish Meteorological Institute and WMO Global Cryosphere Watch.

Changes in snow mass between 1980 and 2018. In areas A-E, large regional changes in the amount of snow are observed. In the blue areas (A, E) the snow mass has decreased, in the red areas (B, C, D) the snow mass has increased. The scale is the change in the water value of snow in millimetres per 10 years (the water value indicates how high a column of water the snow corresponds to when melted). Finnish Meteorological Institute, modified from the chart presented in the Nature article.