Expedition back from Antarctica

The Finnish research expedition FINNARP 2010 returned from Antarctica in early February. This year, research focused on meteorology and the surface layer of the continental glacier. 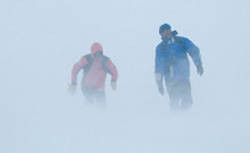 This was the 17th Finnish expedition to Antarctica. The group comprised ten people: five scientists from the Finnish Meteorological Institute and the University of Helsinki, a physician, an engineer, a cook, the leader of the expedition, and a specialist planner from FINNARP Logistics. In addition, two Swedish scientists from the Swedish Institute of Space Physics participated in the expedition as FINNARP’s guests. They carried out measurements with a movable radar that observed movement in the upper atmosphere.

“In spite of the rough storms at the beginning of our stay and the demanding work schedule, the expedition was able to finish almost all of its tasks. For example, we completed nearly 1,000 kilometres of field trips to the coast and inland, serviced several automatic measurement stations and carried out an extensive summer measurement programme. The expedition was very international; four nationalities were represented in the Finnish and Swedish programmes,” says expedition leader Mika Kalakoski.

The expedition’s supplies weighed nearly 3,000 kg. Scientific research instruments accounted for 650 kg of this; the rest were safety equipment, supplements for the station and food.

Research on meteorology and the surface layer of the continental glacier

At the Finnish research station Aboa, the Finnish Meteorological Institute’s team of three scientists conducted research pertaining to meteorology in the Antarctic. The studies focused on wind conditions over the glacier, the thermal economy of the atmosphere, heat exchange between the snow and air, the physical properties of snow, and solar radiation, and long-wave thermal radiation. The impacts of the Basen nunatak, the summit of a mountain emerging from the ice, on the atmosphere were also studied. The research project utilised three unmanned airplanes, measuring instruments carried by balloons, an acoustic radar, weather masts, and turbulence and radiation meters. Never before have meteorological measurements in Antarctica been made with equally diverse research instruments. The results will help improve the models used for weather forecasting and the climate.

Finland joined the international Antarctic Treaty in 1984. Membership requires that Finland conducts scientific research in the Antarctic. During the coming season, research will be carried out mostly from the Finnish research station Aboa. The field trips to the coast and inland, required by scientific projects, extend about 200 km from the station.