The historic MOSAiC expedition in the Arctic Ocean came to a successful end on 12 October 2020, when the research icebreaker Polarstern returned to her homeport in Bremerhaven. The goal of the year-round MOSAiC expedition was to investigate the processes occurring in the various components of the Arctic Climate System. 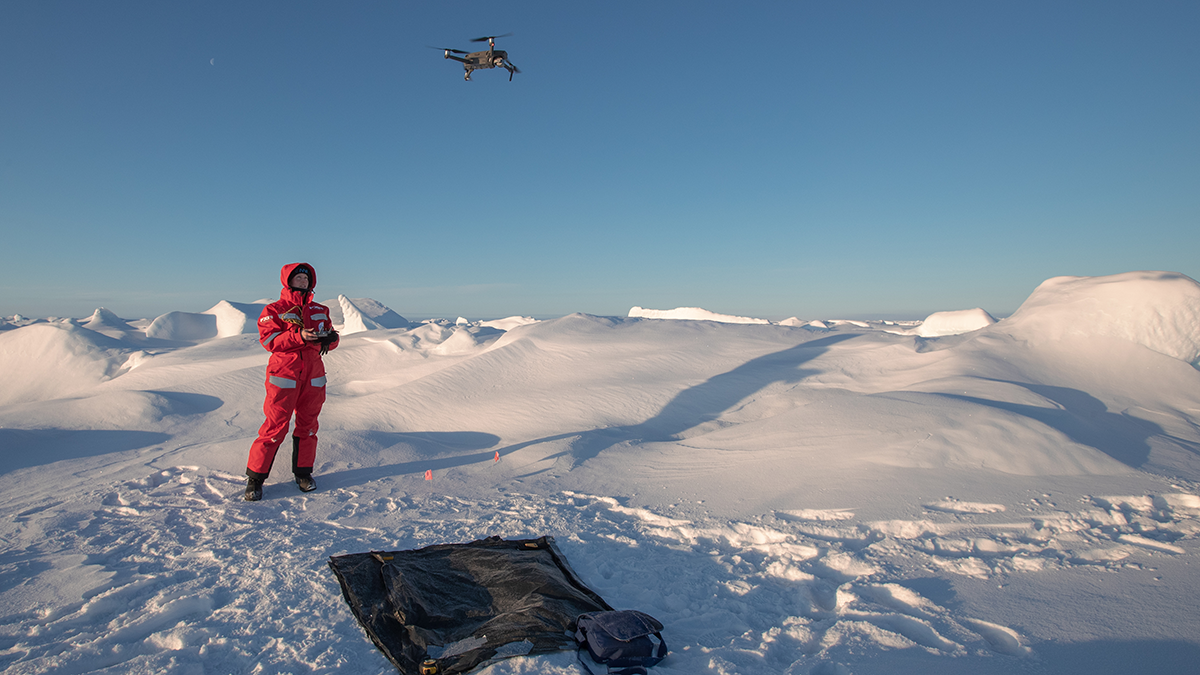 The coronavirus finally did not stop MOSAiC expedition. Its last phase, leg 5, took place from 3rd of August until 12th of October 2020. Researchers Roberta Pirazzini and Henna-Reetta Hannula from the Finnish Meteorological Institute participated in the final leg of the historic expedition. Before they could join the expedition, they had to spend two weeks in quarantine in Bremerhaven, Germany.

For their research, Pirazzini and Hannula used drones in the challenging conditions near the North Pole. Spectral and broadband radiometers were installed on drones to measure the surface albedo over different horizontal scales.

“These measurements will enable the derivation of relationships between the albedo measured from ground-based platforms, which typically have metre-to-tens-of-meters footprint, and satellite observations or large-grid model outputs”, researcher Roberta Pirazzini explains.

The Finnish Meteorological Institute researchers also participated in the other ICE team measurement activities, especially contributing to the snow measurements and to the characterization of the ice surface scattering layer.

Operating drones close to the North Pole was extremely challenging: the moist and freezing air conditions often prevented the flights, as ice quickly formed on the propellers. Moreover, the proximity with the geographical North Pole made the navigation system very unreliable and unstable. Therefore take-off, landing, and part of the flights were carried out in manual mode. This required the selection of an isolated area for the drone operations to avoid collisions with people and other instruments.

Furthermore, because of the drift of the ice floe during the flights, continuous adjustments of the drone position were needed.

“When the wind chill temperatures dropped below –10°C, it became difficult to keep the fingers warm and to be able to operate the sticks of the radio-controller for 20 consecutive minutes”, Pirazzini explains.

All phases of an expedition in one leg

At the end of leg 4, the original MOSAiC ice floe had broken apart. Therefore leg 5 included the search of a new ice floe, the camp installation, the establishment of the daily routines, the camp removal, and the packing of the entire cargo while returning to Bremerhaven.

“The new floe was found after crossing the North Pole and luckily did not break during the measurement period”, Henna-Reetta Hannula explains.

The initial freezing state with already frozen melt ponds was followed by melting and re-opening of the melt ponds, and by a successive freeze-up and snow deposition over the melt ponds and leads. This surface evolution was associated to dramatic changes in surface albedo, which were captured by the SPECTRA aerial albedo measurements.

Pirazzini and Hannula participated in MOSAiC leg 5 through the project “DEvelopment of snow/ice/ecosystem models using winter-to-summer ARctic observations of coupled snow, ice, and ecosystem processes” (DEARice), funded by the EU H2020 -project ARICE, with the contribution of INTAROS in the development of the drone SPECTRA to be used in ships of opportunity.

The goal of the MOSAiC expedition (Multidisciplinary Drifting Observatory of the Study of Arctic Climate) was to investigate the processes occurring in the various components of the Arctic Climate System, namely atmosphere, sea ice, ocean, biogeochemistry and ecosystem, and the interactions between them. Finnish Meteorological Institute’s research professor Jari Haapala participated in leg 1 of the expedition in autumn 2019.

The grand finale to the expedition of a century