Daytime temperatures, in particular, rose above the regular level. In Southern Finland, the mean temperature for the month was up to six degrees above long-term average. 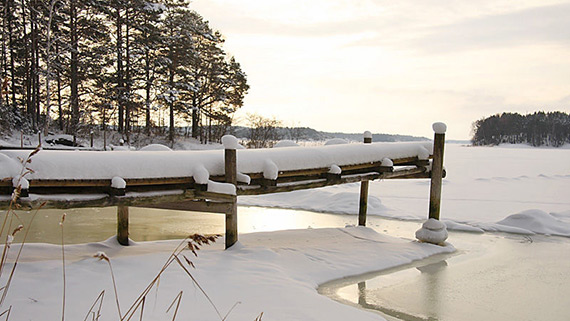 According to the Finnish Meteorological Institute's statistics, February was milder than normal in most parts of the country. The temperature remained slightly below long-term average only in Northern Lapland. In southern parts of Finland, February's mean temperature was up to six degrees higher than average. In Southern Finland, a February as mild as this repeats on average once in 5–10 years. The last time that February was milder in the south was in 2016.

The month's precipitation level was higher than normal throughout the country. The deviations were approximately 1.5 times the normal level. The highest level of precipitation, 94.8 mm, was measured in Pötsönvaara, Ilomantsi, and the lowest, 25.3 mm, at Muonio Station. The last time there was a rainier February was in 2016.

At the end of the month, there was 10–30 cm of snow in the coastal areas and mainly 50–70 cm in the area stretching from North Karelia to Lapland. In many places, the amount of snow was slightly below average.

Both the start and the end of the winter were mild

The winter months, i.e. from December to February, were just over one degree warmer than normal in the south and central parts of Finland. In Lapland, the temperature was closer to long-term average. December and February were clearly milder than average, but January had a colder spell. Depending on the observation station, the last time winter was milder than this was either last year or the year before last.

The precipitation level was slightly higher than normal in southern and northern parts of the country. Likewise, snowfall levels were somewhat higher than average, yet Kymenlaakso was the only place where the level was unusually high.