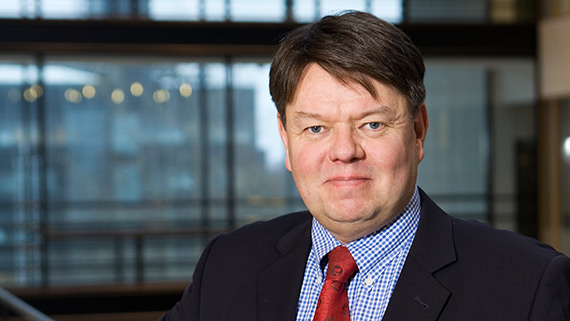 "Petteri Taalas's appointment as the Secretary-General of a UN organisation is a significant achievement for Finland. This demonstrates that Finnish top expertise is in high regard internationally and illustrates the extensive, high standard work carried out by the Finnish Meteorological Institute both internationally and nationally," Minister of Transport and Communications Anne Berner commented.

"The appointment of a Finnish Secretary-General will increase Finland's visibility and stature in the UN.  It will open up new opportunities to influence the WMO's activities. The appointment will also benefit Finnish enterprises with activities linked to the climate, seas and weather, research and development activities and authorities," stated Minister for Foreign Affairs Timo Soini.

"I am very pleased with my appointment. I feel this is a show of recognition for the active international cooperation in which we have extensively participated in the field of meteorology," Petteri Taalas said.   "My objective as Secretary-General will be to develop the WMO's activities so that they meet with the needs of Member States and Territories even better than previously and to support the work carried out by national meteorological institutes. National meteorological institutes are now operating in an increasingly challenging operating environment, where global phenomena such as climate change or the readiness requirements related to extreme weather phenomena apply to everyone."

The World Meteorological Organization Secretary-General election took place at the World Meteorological Congress on 4 June 2015. A total of 154 votes were given during the election of which Petteri Taalas received 117, that is the requisite two-thirds majority vote. The Secretary-General election included candidates from South Africa, India, Russia and Finland. - "I would like to extend a heartfelt thank you to experts from the Ministry for Foreign Affairs, the Ministry of Transport and Communications and the Finnish Meteorological Institute for the support I have received during my campaign," Petteri Taalas expressed.

Established in 1950, the World Meteorological Organization (WMO) is the UN's weather, sea and climate expert. The WMO has a membership of 191 Member States and Territories. Finland has been a member from the time the organisation was established. The WMO has a central role e.g. in the development of a global weather observation network and natural catastrophe warning system, as well as in matters related to climate change and air pollution, renewable energy and the control of water resources. The WMO is also an important actor in matters related to the arctic area.

The Secretary-General heads the WMO's Secretariat, which is located in Geneva.

Petteri Taalas has acted as Director General of the Finnish Meteorological Institute from 2002 with the exception of 2005-2007, when he worked as the Director of the WMO Development and Regional Activities Department in Geneva. He is also Finland's permanent representative in the WMO and has been a member of the Executive Council 2008 - 2015.

The World Meteorological Congress meets every four years to decide on the programmes and policies, as well as to approve the budget for the next four year term. The Congress elects the members of the Executive Council and appoints the WMO Secretary-General.  All WMO Member States and Territories attend the World Meteorological Congress. The Executive Council has 37 members and is responsible for the coordination and implementation of programmes and coordinating the use of the organisation's budget.