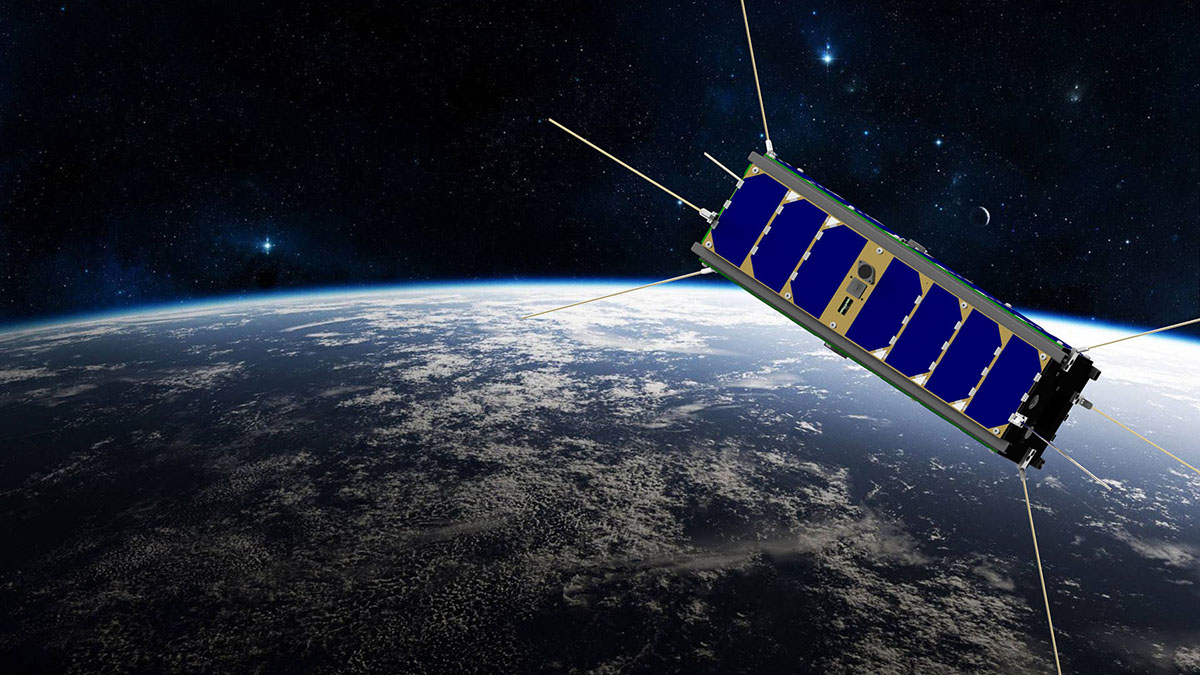 An observation image of Foresail-1 satellite in space.

The Centre of Excellence studies space conditions and, on the basis of the research, develops more sustainable satellites that will not turn into space debris in Earth's orbits.

The Foresail-1 satellite will carry with it two major scientific instruments developed by the Centre of Excellence - the PATE particle telescope, which will study the near-Earth radiation environment, and a plasma brake which will be used to test bringing spacecraft back into the atmosphere.

“The Centre of Excellence brings together Finland's leading experts in space science and technology. With the long-term funding from the Academy of Finland, we have created Finland’s first scientific space programme. The goal for the future is to safeguard Earth's orbits with state-of-the-art research and to revolutionise experimental space physics with the help of nanosatellites,” says Professor Minna Palmroth, Head of the Centre of Excellence at the University of Helsinki.

The satellite launch contract was signed with the German company EXOLaunch, which coordinates the launch sites of the US company SpaceX.

“In addition to Foresail-1, the Falcon 9 rocket will carry several other small nanosatellites. The rocket will be launched into orbit at an altitude of about 550 kilometres in late spring 2022. More detailed information on the timing of the launch will be available during the spring. The Foresail-1 team, which is currently made up of professionals and students, is focusing on integrating the instruments into the satellite and the final tests, which will take place in January,” says Assistant Professor Jaan Praks from Aalto University.

The goal of the Foresail-1 satellite is to take the understanding of the radiation environment in space to a new level. This knowledge will help develop nanosatellites that are radiation-tolerant and last longer in space.

“The relativistic electrons in the radiation zones are especially dangerous for satellites, because their intensities vary enormously over time, which is the result of different particle acceleration and loss mechanisms,” says Professor Rami Vainio from the University of Turku.

Our planet Earth is surrounded by two distinct high-intensity radiation zones. The inner zone has protons and the outer zone has electrons. The proton zone is relatively stable, but the electron zone is in constant turmoil as Earth’s magnetic field, which traps particles further from the planet, is much more susceptible to solar wind disturbances.

“The goal of the PATE instrument is to find out more precisely than before how electrons exit the radiation zones into the atmosphere,” Vainio says.

The PATE particle telescope developed at the University of Turku is the main payload of the Foresail-1 satellite. The instrument’s two particle telescopes measure the energy and amount of high-energy particles (electrons and neutral hydrogen atoms) from space radiation. High-energy particle radiation causes radiation damage to space-borne equipment and shortens the life of the equipment. Photo: University of Turku / Arttu Punkkinen

The plasma brake helps to destroy the satellite in the atmosphere

Even the most durable nanosatellite will not last forever. A decommissioned nanosatellite can take years to sink into the atmosphere where it burns up. The Finnish Meteorological Institute has developed a plasma brake that would allow the satellite to be guided into the atmosphere in as little as two months. The plasma brake has already been tested in the Aalto-1 student satellite that was launched in 2017, and now its operation has been developed to be even more reliable.

“The plasma brake works in theory, but the braking force of the plasma brake has not yet been measured in space,” says Pekka Janhunen, Research manager at the Finnish Meteorological Institute.

"After opening the long tether reel of the plasma brake, a tension is applied to the tether and the resulting braking force is measured. The result will enable us to calculate how long a plasma brake tether needs to be if the satellite is to be brought down in a certain time and its mass and orbital height are known,” says Janhunen about the development of the plasma brake.

Plasma brake technology can also be used to lower the satellite's orbital track by the desired amount.

"In particular, research and weather satellites normally operate in a solar synchronous orbit at an altitude of about 600 to 800 kilometres. The rotation of the orbital track with respect to the sun remains in place and thus the satellite orbits the earth daily under the same light conditions. After lowering the satellite's orbital altitude, the satellite can make overflights at different times of the day,” says Janhunen.

The plasma brake, developed at the Finnish Meteorological Institute, includes a tether made of fine aluminum wire that travels into space in the box shown in the picture. The plasma brake provides a re-entry at the end of satellite missions by bringing them down to the atmosphere, where they are destroyed. The technology could reduce the orbital debris problem posed by abandoned satellites accumulating in the most popular orbits. Photo: Finnish Meteorological Institute / Petri Toivanen

Minna Palmroth Professor and Director of the Centre of Excellence, University of Helsinki Tel. + 358 40 5311 745 minna.palmroth@helsinki.fi