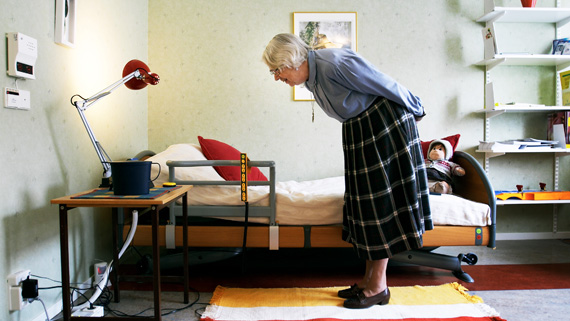 The population of Finland is projected to age significantly in future decades. Over the same period, the Finnish climate is expected to become warmer, leading to changes in the number and severity of extreme weather events that could have important impacts on the health of elderly people. In order to illustrate changes in the risks of climate change for the elderly in different parts of Finland, the Finnish Environment Institute (SYKE) has developed an interactive vulnerability mapping tool in collaboration with the Finnish Meteorological Institute (FMI). The tool was published today in the national Climateguide.fi web portal. It builds on earlier joint work conducted with the Universities of Oslo (Norway) and Linköping (Sweden) for the three Nordic countries: Finland, Norway and Sweden.

Compared to other age groups, the elderly (65 years or older) tend to be more exposed to health risks of specific weather events. "A warmer climate is expected to bring some benefits for the health of elderly in winter, with fewer intense cold spells and less cold-related symptoms and mortality" states Reija Ruuhela, a Climate expert at the Finnish Meteorological Institute. "On the other hand, in northern regions with temperatures that currently remain well below zero throughout the winter, warming could mean more icy surfaces in the future and an increased risk of injury. Conditions should improve gradually in the rest of the country during this century".

It is in the summer, however, that the impacts of climate warming are expected to be most severe. As Ruuhela explains: "The numbers of days with extremely high summer temperatures are expected to increase in the coming decades. This can be dangerous for some elderly people, as we saw during the hot summer of 2010 when mortality rates increased significantly".

Elderly people may be vulnerable to extreme weather events for a variety of social, economic and health-related reasons. With increasing age, people are less able to adjust to rapid changes in temperature. They may be more at risk in such situations if they live alone or have difficulties accessing essential health care or other welfare services. The research team interviewed national and regional officials from the social, welfare and health sectors in Finland and Sweden.

"They had many helpful suggestions for reducing the impacts of extreme weather" reported Stefan Fronzek, a Senior Researcher at SYKE. "Ideas included improving communal engagement with elderly residents, raising community awareness of the risks of extreme weather, enhancing preparedness for such events, and greater consideration of elderly persons' needs in urban planning".

With the new map tool a user can view how indicators of climatic and socioeconomic conditions may place elderly people at risk, and how the situation could change in the future. The user can select a single indicator or a combination of several indicators, and produce maps that illustrate the changes at municipal scale in Finland.

Research Professor Timothy Carter, who led the research project, explains: "The mapping tool allows users to view how future climate change may alter the risk of extreme weather events in different parts of Finland. Users can combine this information with estimates of the proportion of elderly people living in each municipality as well as the level of local health, social and welfare provision. We hope that the tool can raise awareness among decision-makers who need to plan measures for adapting to the changing conditions."

There is also an earlier version of the tool, including estimates for Finland, Sweden and Norway (in English): http://iav-mapping.net/U-C-IAV/elderly/

Climateguide.fi is maintained by the Finnish Meteorological Institute and the Finnish Environment Institute. The portal also includes expert contributions from a number of other research institutions.