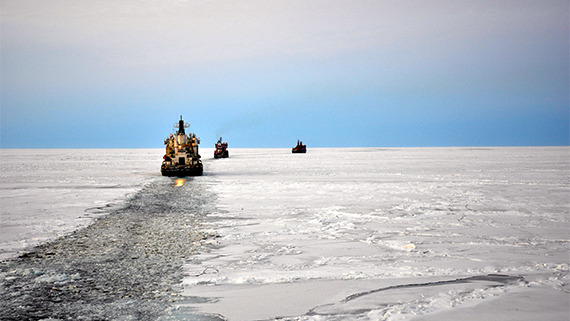 As a result of climate change the thickness of ice in the Arctic Ocean has decreased, and the amount and extent of ice has decreased over many years. Before 2000, the annual smallest extent of sea ice cover fluctuated between 6.2 to 7.9 million square kilometres. During the last ten years, the extent of the ice cover has fluctuated between 5.4 to 3.6 million square kilometres. The last ten years have also been the ten years that have seen the least ice.

The 3.7 million square kilometres that were measured in September 2012 was the lowest amount of ice recorded so far since records began. "The annual differences are due to normal climate variability, but at the same time the extent of sea ice has been reducing throughout the measurement period. The change is over 13% a decade", comments Jari Haapala, Head of Unit at the Finnish Meteorological Institute, and he points out that the seas' ice cover is one of the most important indicators of climate change.

The ice cover in the Arctic Ocean has been measured precisely since 1979. The most comprehensive information about changes in sea ice come from satellite measurements and these are used to calculate how the area covered by sea ice changes and how it fluctuates over the months and years. The biggest reduction is seen in September when the annual level of ice cover is at its minimum.

"2016 was in interesting year for researchers into the ice because the extent of sea ice cover was at a record low in winter and spring too. Observations of the thickness of the ice also showed that the amount of sea ice in the Arctic was exceptionally low that year. However, the summer season in the area was cooler than average and as a result the ice field did not melt as rapidly as forecast", explains Jari Haapala.

The smallest instantaneous extent of ice cover, 4.14 million square kilometres, was measured on 10th September. That is the second lowest figure measured since records began. The was a significant formation of new ice during the second half of September,and the average extent of ice cover for September was finally 4.7 million square kilometres This is the fifth lowest value after the years 2012 and 2007.