Almost one in three people in Finland have suffered a slip-and-fall accident either this winter or last winter. Of those, close to a third were injured and one in eight had to take time off from work or school because of the fall. These accidents are often caused by the weather, but frequently it is our being ill-prepared for slippery conditions that is partly to blame. The Pysy pystyssä (Stay on your feet) campaign is a reminder that you can equip yourself to prevent slip-and-fall accidents. 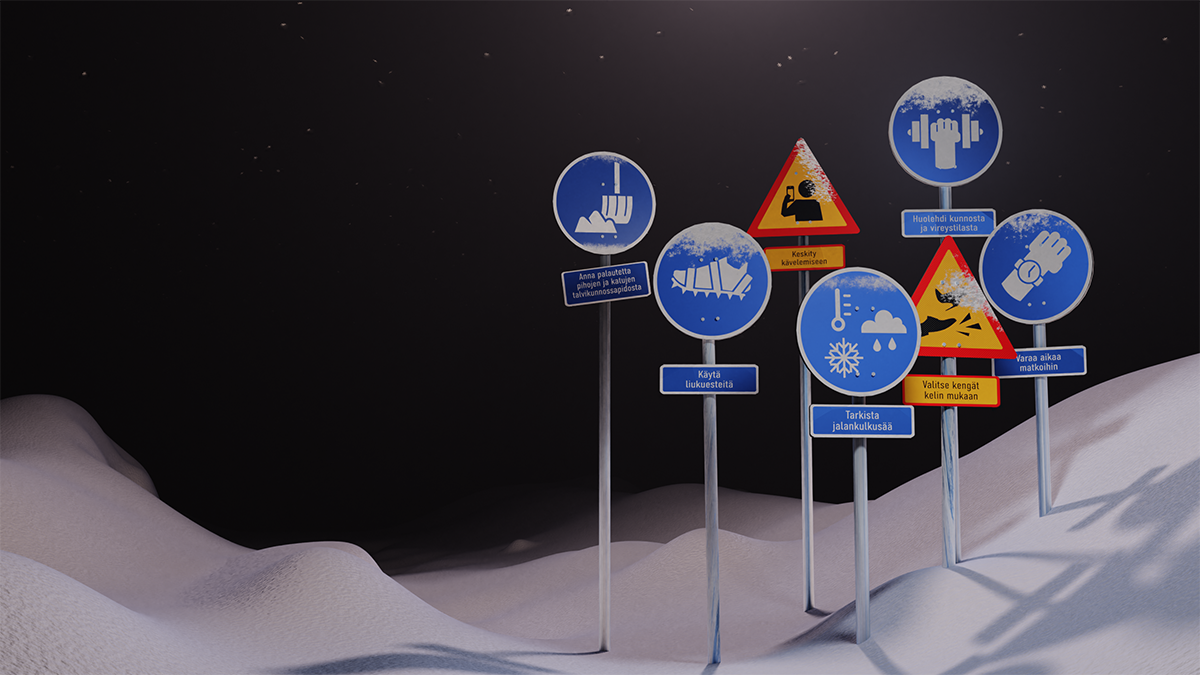 A recent survey by the Finnish Road Safety Council shows nearly one in three Finns have slipped and fallen either this or last winter.* More than half of them said their accident was caused by extremely slippery conditions.

Footwear unsuitable for the weather conditions was the cause of accidents in almost one third of the cases according to the survey. Being in a hurry was a contributing factor in one in six of the accidents, while 7 per cent were caused by some distraction, such as looking at a mobile phone.

‘There’s not much we can do about the weather, but we can improve how we are equipped and stay alert for risky conditions. Over short distances, wearing traction cleats (anti-slip grips) or studded/high-traction shoes can help us to prevent slips and falls. Allowing more time for your outdoor trips is one way to avoid having to hurry and it is worth considering how risky or not it is to use your phone while you are walking,’ says the Finnish Road Safety Council’s Planning Officer Laura Loikkanen.

Three per cent of the survey respondents mentioned alcohol or some other intoxicant as a reason for their fall.

‘Alcohol use significantly increases the risk of falling. The higher the blood alcohol level, the greater is the risk of having an accident. Even with levels of less than 0.5 per ml, your level of attentiveness will be lower and your movements more clumsy. If you have a blood alcohol level between 0.5–1.0 per ml, your reaction times and the control you have of your movements are considerably reduced,’ confirms EHYT Finnish Association for Substance Abuse Prevention expert Maaret Väkinen.

Of those who slipped and fell, almost a third were injured

When conditions are slippery underfoot, almost half of the Finnish people commonly clip traction cleats onto their shoes or wear studded footwear. Meanwhile, almost one third take no precautions at all against slippery conditions. The survey indicated that people over 50 are the best prepared for slippery conditions and use either traction cleats or studded footwear. Precautions also vary between men and women, as men use cleats or shoes with studs far less often than women do.

Almost a third of those who had slipped and fallen were hurt, and approximately one in seven of them had to see a doctor or nurse.

Traffic signs for staying on your feet

The traffic signs created for the Pysy pystyssä campaign to keep people on their feet are based on seven important steps, which have been highlighted in the campaign over the years. The signs encourage people to notice that you can lessen the risk of slipping and falling by taking your own precautionary actions.

The Pysy pystyssä campaign runs from January 13 through January 24, 2021. On social media you can follow the conversation by following the hashtag #pysypystyssä. The campaign website www.pysypystyssä.fi offers articles that look at different aspects of slip-and-fall accidents and ways to prevent them.

*The survey by polling company Kantar TNS Oy was taken in December 2020 at the behest of the Finnish Road Safety Council. A total of 1,017 people took part in the survey (in Finnish).