Approximately one in three of the three hundred researchers at the Finnish Meteorological Institute are women. This article presents four of them. What is it like to be a researcher? 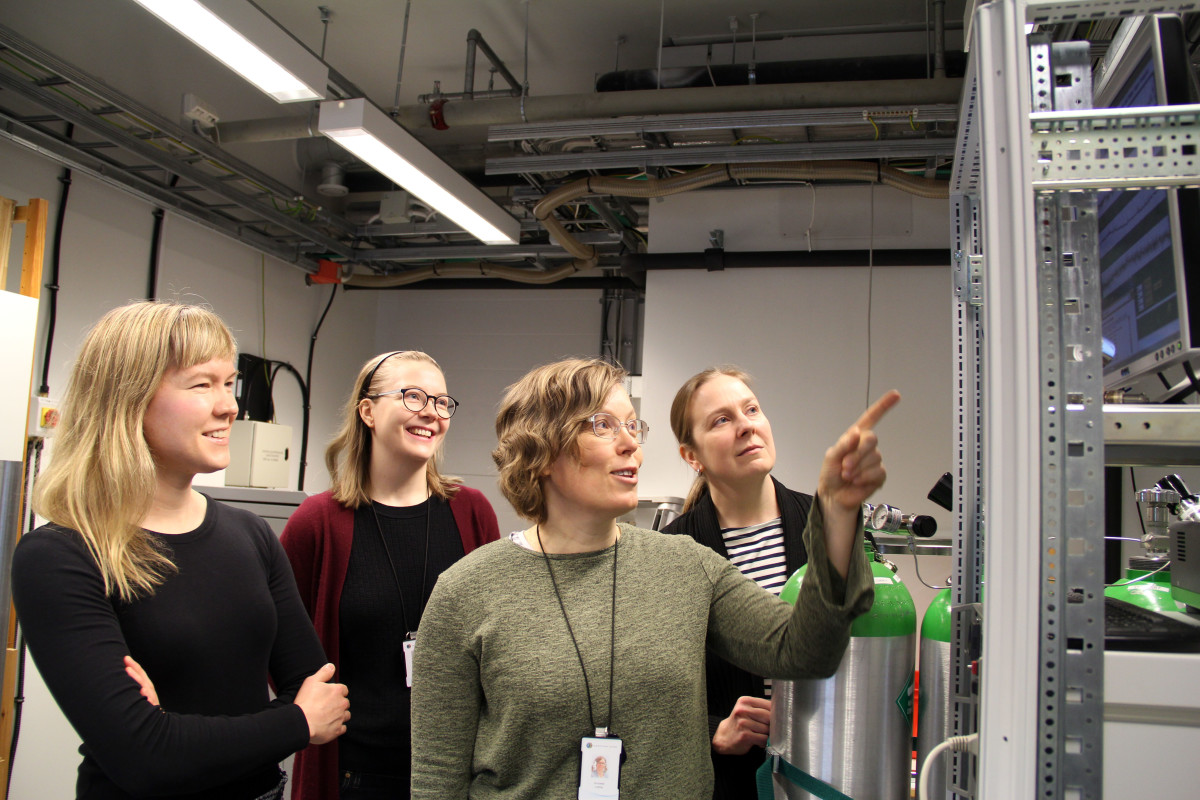 Versatile, meaningful, fun, independent and creative, even. These are the adjectives with which FMI researchers Maria Hieta, Marjo Hippi, Ulpu Leijala and Annalea Lohila describe the nature of their work.

As Maria Hieta puts it, her work involves developing a "Martian weather station". Her field of research includes planetary atmospheres and space technology.

Hieta builds pressure and humidity sensors for space equipment and compares the Earth's atmosphere to the atmospheres of other celestial bodies. Among other things, she has built equipment for the NASA's Perseverance rover, which is to be launched to Mars this year, and for the ExoMars lander.

"If these two missions are successful, we will have several weather stations on the surface of Mars. This would enable simultaneous data collection at numerous locations which in turn would facilitate researching and modelling the atmosphere," Hieta explains.

Hieta, whose career at the FMI began ten years ago, has been fascinated by space since she was a child. At first, she applied to study astronomy. However, Hieta felt inspired by the technical aspect and ended up studying space technology. At some point, she even dreamed of becoming an astronaut.

"I have always been passionate about space, but I have had to set a new course several times."

Hieta considers the Mars missions, for which she has personally tested and delivered equipment, the most remarkable achievements of her career. However, she cannot be overly optimistic about the missions' successfulness: years of hard work on a device may disintegrate in an instant if complications occur in the landing.

"It would be another highlight if even one of the two devices to be launched this year land successfully. Then a device I have tested would operate on Mars," says Hieta.

Research with a clear connection to daily life

Not all research carried out at the FMI takes place on other planets. The institute conducts plenty of research that has concrete connections to everyday life.

Marjo Hippi's work involves the maintenance of models for road weather and slippery conditions for pedestrians, whereas Ulpu Leijala observes changes in sea level. Both of them are also working on a doctoral dissertation. Leijala's dissertation studies future coastal flooding risks and uncertainties related to sea level estimates. Hippi's dissertation, on the other hand, will make connections between pedestrian and road weather issues. What traits are required of a researcher?

"Perseverance, curiosity and precision! In addition, we must be able to collaborate and give presentations in scientific conferences and to various audiences," says Leijala, who has a background in physics and started her career at the FMI approximately a decade ago.

Leijala provides recommendations for minimun building elevations on the Finnish coast and evaluates extreme sea levels to support the safe operation of nuclear power plants, for example. Her research mainly focuses on Finland, but international co-operation is also important as the effect of global mean sea level rise must be estimated in the Baltic Sea region as well. In addition, Leijala's work description involves co-operation with environmental research infrastructures.

On the other side of the Dynamicum building, Hippi develops and maintains a numerical road weather model and a model for pedestrians. In addition, she engages in co-operation with various actors.

"For example, we advise hospitals to prepare for slippery days on which emergency clinics may become congested," she explains.

The competence of a road weather expert is also required when communicating about the new Road Transport Act which provides for replacing calendar-based winter tyre regulations with regulations based on weather conditions.

At the start of her career, Hippi worked as a meteorologist on duty, but she has carried out research since 2006. Her road to meteorology had its twists and turns, but her interest in mathematics and physics has remained steady since her school years.

"At the university, I ended up in the meteorology freshers' group and decided to stay. You never know how seemingly insignificant occurrences may affect the rest of your life," Hippi states.

Annalea Lohila has studied greenhouse gases for the past 20 years, but she, too, says she became a researcher almost by chance. Lohila also acts as Associate Professor at the University of Helsinki Institute for Atmospheric and Earth System Research (INAR).

"Of course, it was not pure coincidence. I started to grow interested in research when working on my master's thesis. After graduation, I enlisted as an assistant researcher in northern Russia where my duties included marsh gas measurement, and I got introduced to practical research. In the tundra, we lived in tents and travelled by helicopter."

The experience gained in Russia helped Lohila, who was still in the early stages of her research career, to receive a researcher's position in an FMI project sponsored by the Academy of Finland.

Lohila's field of research produces information on, for example, how land use, such as mire drainage, forest use or agriculture, affects carbon sinks in terrestrial ecosystems and how these sinks could be bolstered in order to mitigate climate change. The major question behind the research has to do with the future of natural ecosystems and their carbon sinks.

"We make measurements on the terrestrial ecosystem and develop models that enable predicting what will happen to specific carbon sinks."

"For the first time, we have been able to collect long time series of data which enable year-specific comparisons of carbon sinks. By studying long-term observations, we begin to see how natural environments, such as mires and forests, have reacted to weather conditions and climate change," Lohila explains.

The four researchers' careers include a wide range of achievements from international expeditions to significant research results. Lohila lists her doctoral thesis defence as one of the highlights of her career.

"The defence was a wonderful conclusion to an enormous project. For a moment, you think you know everything about everything," she laughs.

She also considers her associate professorship and role as one of the authors of the next IPCC report some of her greatest achievements. However, for Lohila, the most important thing is her magnificent work community where everyone supports each other.

In ten years, Lohila hopes to still be working at the FMI and the University of Helsinki. As a researcher, she endeavours to act as a pioneer in her own field. Marjo Hippi and Ulpu Leijala also consider that they could still work at the FMI after a decade.

"It is fascinating how new topics come up continuously within research, and methods develop. At some point, I would like to work abroad," says Leijala.

Maria Hieta agrees with the others, hoping that she can continue designing space equipment while dreaming about conquering new planets.