Using decades of satellite observations, Finnish and Norwegian scientists calculated the warming effect caused by changes in the snow and ice cover of the Arctic and Antarctic regions. The expansion of Antarctic sea-ice between 2000 and 2015 balanced out the melting of the Arctic region by creating a cooling effect, but significant reduction in Antarctic sea-ice during 2016–2018 completely reversed the trend. These results highlight the previously little-known but important role of the Antarctic sea-ice in regulating Earth’s energy budget. 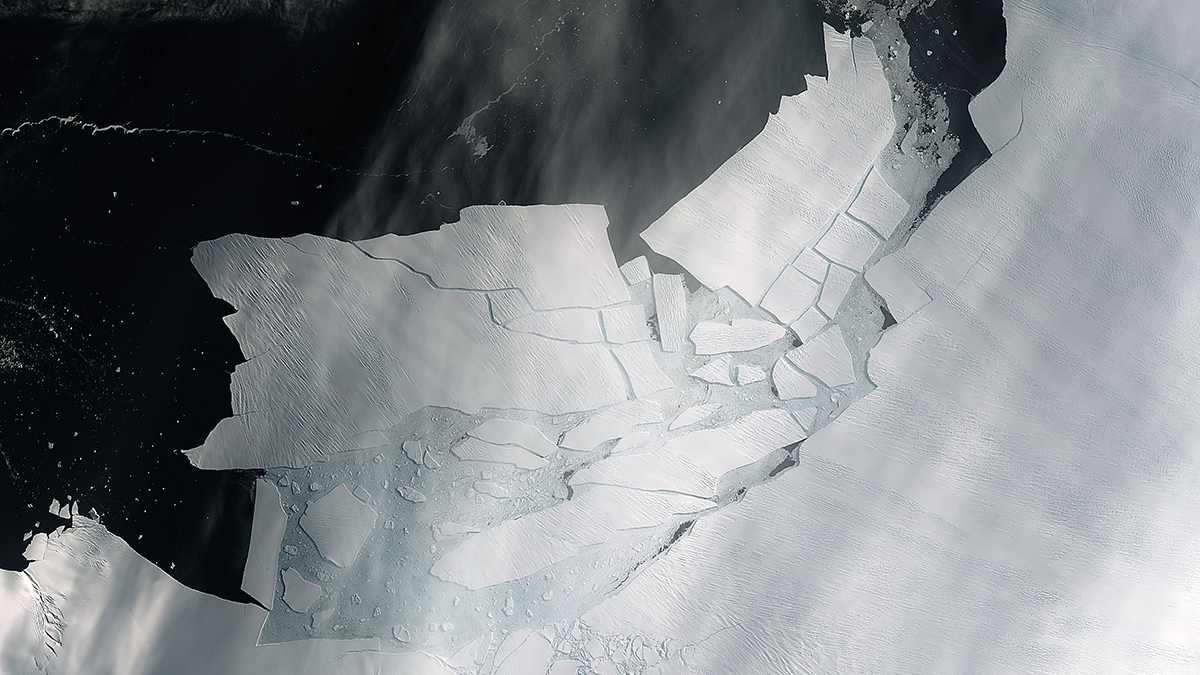 Antarctic sea-ice plays an important role – it can balance the global warming effect of some other areas, or if the sea-ice is reduced significantly, add up to it. Photo: ESA, Copernicus Sentinel data (2020), processed by ESA, CC BY-SA 3.0 IGO.

When Earth’s snow and ice cover melts, the reflectivity of Earth’s surface – known as albedo – decreases. And when the albedo of Earth’s surface decreases, a smaller share of sunlight is reflected back into space. As a result, more solar radiation energy remains on Earth, warming its climate system. Similarly, as the snow and ice cover grows, reflectivity increases, which has a cooling effect. This mechanism is called snow and ice albedo feedback. The scale of the snow and ice albedo feedback is determined by, for example, the amount of sunlight and cloudiness.

In their new study published in Nature Geoscience, scientists from the Finnish Meteorological Institute and the Norwegian Institute of Bioeconomy Research calculated the heating and cooling effect of changes in reflectivity in both the Arctic and Antarctic regions. The study period was between 1982 and 2018 and calculations were based on satellite observations.

The results confirmed previous findings that melting of the snow and ice cover in the Arctic region since the 1990s has had a warming effect. In addition, the new study describes two significantly different developments taking place in the Antarctic region: Between 2000 and 2015, the expansion of the Antarctic sea-ice cover produced a cooling effect that largely balanced out the warming effect caused by the melting of the Arctic region. However, in 2016 there was a notable reduction in Antarctic sea-ice cover, which completely reversed the cooling effect that had increased over the previous 15 years.

“Our results highlight the important, but previously little-known, role of the Antarctica’s sea-ice cover as a regulator of the radiative energy budget in polar regions”, says Aku Riihelä, Research Professor at the Finnish Meteorological Institute and the corresponding author of the study.

“The dramatic change in the sea-ice cover in 2016 also shows that major changes in the sea-ice cover can take place rapidly. For this reason, more attention should be paid to the monitoring of Antarctica and its sea-ice in the future, as well as the development of related models”, Riihelä says.

Between 1992 and 2018 the changes in the reflectivity of polar regions, on average, amounted to a global warming effect of +0.08 Watts per square meter. This corresponds to about 10 per cent of the warming effect caused by annual anthropogenic carbon dioxide emissions since 1992. And this share may increase if the Antarctic sea-ice cover does not recover from its recent shrinkage.

Snow and ice albedo feedback in polar areas: Snow and ice cover reflect sunlight back into the space, which has a cooling effect. If there is less reflective snow and ice, more of that solar radiation remains on Earth, warming its climate system. Photo: Adobe Stock.

“The question of whether the huge loss in Antarctic sea-ice can be recovered is important, given the profound implications for Earth’s radiative energy balance. The Antarctic has long served as a sort of refrigerator in the earth system. Breaking it beyond repair would really chip away at our remaining emission budgets, making it ever more difficult to meet our ambitious mitigation targets,” says Ryan Bright, a Research Professor at the Norwegian Institute of Bioeconomy Research and one of the study’s co-authors.

However, recent studies have shown partial recovery in the Antarctic sea-ice. “While this may be seen as good news, we cannot afford to dismiss the 2016-2018 reversal as anomalous until we really understand the mechanisms that caused it”, says Bright.

The study was carried out in 2020–2021 in cooperation between researchers from the Finnish Meteorological Institute and the Norwegian Institute of Bioeconomy Research (NIBIO). The work of researchers from the Finnish Meteorological Institute was partly financed by the Academy of Finland. The main suppliers of satellite measurements used in the study were the European Organisation for the Exploitation of Meteorological Satellites (EUMETSAT) and National Aeronautics and Space Administration NASA.